Among the many baking mysteries that exist out there, I feel like “how do you make brownies more cake-like?” is one of those million dollar questions.

Whether you prefer fudge-y brownies or cake-y brownies, most people have a preference and it’s good to know what changes you can make to achieve either effect.

Personally, I love both and as a long-time brownie fanatic I’ve kept favorite recipes in my arsenal for at least one of each kind. My Mother’s classic recipe was definitely more fudge-like.

But who doesn’t sometimes crave a cake-like brownie; the kind that you can find at your local coffee shop and are perfect with a good cup of coffee? 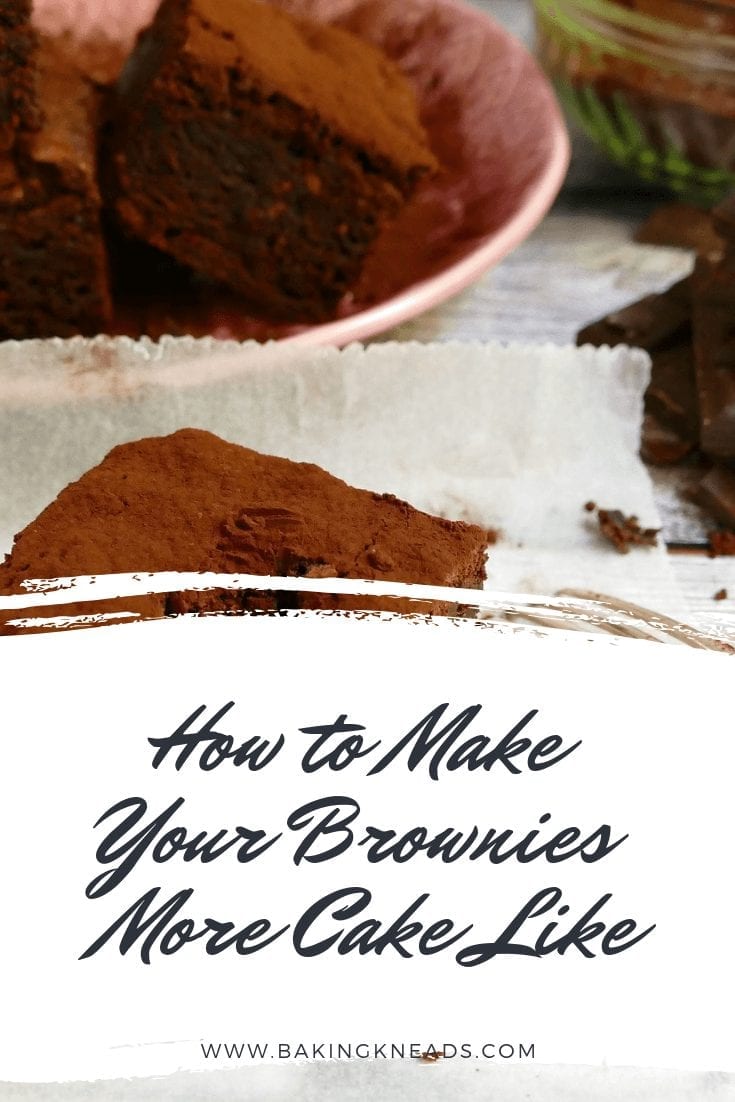 Before you learn how to make cake-like brownies, figure out whether you should use a glass or metal pan to bake them.

What is a cake-like brownie?

Cake like brownies have a similar texture to cake, but it’s more complicated than that.

The crumb of a cake-like brownie should be lighter, fluffier, and overall softer and less dense. A fudge-like brownie on the other hand should exhibit dense chocolatey flavor with a moist and rich chewy texture.

Brownies don’t generally have a reputation for being finicky, as the recipes out there usually follow a tried and true method. But an adjustment of things like the ingredients themselves or the method of combining those ingredients together, in this case are the most important.

But wait, then what is a fudge-like brownie?

Perhaps we should look at what makes a brownie fudge-like first, which is what most people are after. The typical brownie recipe follows instructions similar to this:

Melting the ingredients in this case is key. It’s what sets apart brownie batter from most other common baked goods, like cookies, muffins, cakes, and pastries.

It’s safe to say that in the baking world, melting ingredients before combining them should create a more thin, moist, and dense or fudge-y product.

Think thin and chewy cookies and dense cakes. Cakes and cookies made with softened or cold butter tend to result in a fluffier texture and a lighter crumb.

For example, imagine if you were to make pastry with melted butter. Picture yourself cutting cold butter into flour in one bowl, eventually forming it into a nice ball of dough, then rolling it out, and baking it to a nicely crispy and risen crust. In the other bowl, add melted butter to flour.

My guess is that you’d end up with more of a liquid or paste than anything that resembles dough.

Baking it would probably lead to a thin, oily, and crisp… something. I’m not sure there’s a word for what would happen if you tried! 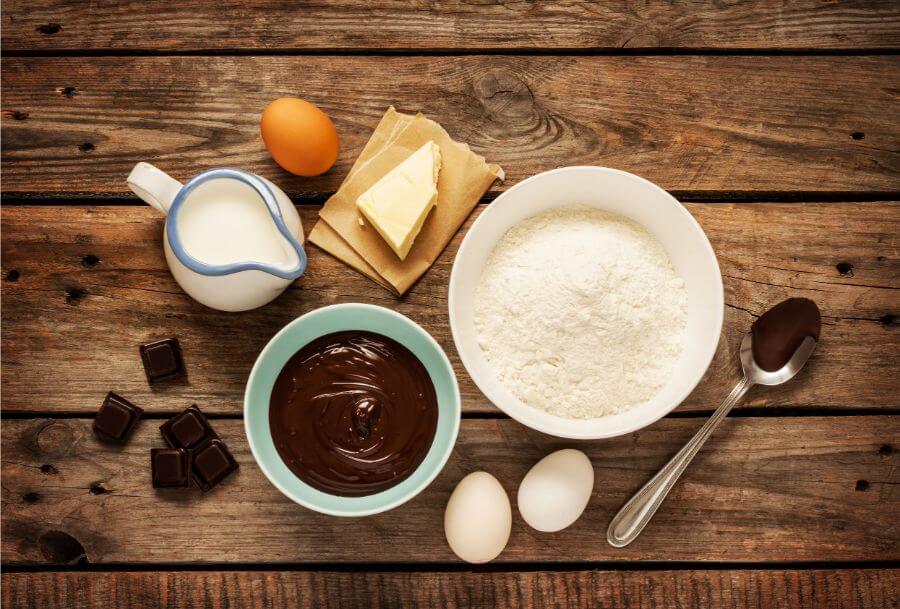 The next most important to consider is the actual ingredients themselves. Your standard brownie recipe typically consists of a combination of:

The ingredients themselves are not that different from for example, a cookie. Of course, there are some variations (cookies often use a mix of brown and white sugar or just brown, whereas brownies usually use only white – at least in my experience).

Flour and eggs should remain the same, and butter as well however as we’ve discussed how you prepare it is key. Both drop and cut-out cookies typically use cold or room temperature butter.

Speaking of ingredients, learn what ingredients to substitute in your brownies when you’re missing an important one.

Well, if we think about what makes a cake-like cookie, most of us would propose that an increase in flour and butter and/or a decrease in sugar would probably produce a softer, fluffier texture and therefore one more similar to cake. Sugar after all, melts and should be considered a liquid in baked goods.

All granulated sugars are going to melt when they hit an oven for a period of time. More sugar therefore leads to a moister product!

There is of course a difference in the type of sugar itself; brown leading to a softer and chewier product, whereas granulated leads to those nice crisp edges we all look forward to in a brownie. Or at least I do.

This article and video from Martha Stewart (http://www.marthastewart.com/1099220/crispy-cakey-or-chewy-how-do-you-your-chocolate-chip-cookies) describe this adjustment of butter and sugar in a really simple and clear way. I’m a visual learner and I find putting these ideas into video makes them so much easier to understand.

As you can see in the video, a simple adjustment of the butter and sugar ratios as well as a change of the type of sugar from brown to white and vice versa, can completely change a cookie’s texture and appearance.

How can I apply this to brownies? 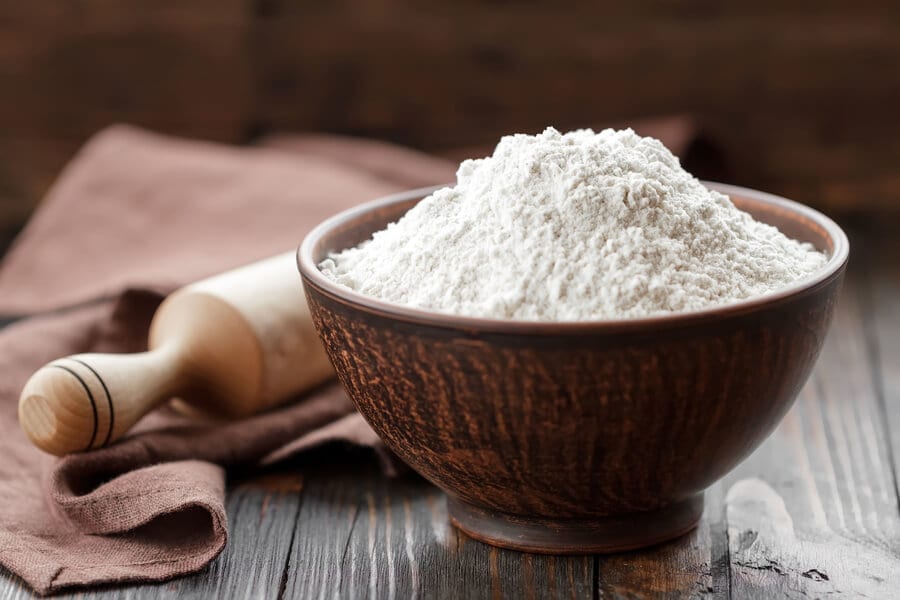 In my opinion, the easiest change you could make would be to adjust your flour. The other ingredients should remain the same, as any adjustment of one ingredient will automatically decrease the ratio of others.

Since brownies are primarily made up of fat, eggs, sugar, and flour, an increase in flour will decrease the ratio of fat and sugar by default which will lead to a softer and less chewy and dense product.

If you’re not a fan of rich or oily brownies, I would also consider replacing a small portion of the butter with something else that will lend moistness but not fat, such as applesauce.

Having the butter melted before baking leads to an oilier product so to reduce this it’s possible to use a replacement to create a lighter texture.

In baking, when you change more than one thing, you are often forced to change multiple others in order to create the right balance. To make it easier on yourself, try adjusting your flour first.

Unfortunately, the process for brownie making (melting the butter, etc.) is key in what makes a brownie a brownie and should remain the same.

Best of luck with your brownie making adventures, and if you’re up for it, take this a step further and use your brownie mix to make a cake!