A cupcake is the epitome of American desserts. With the fluffy cake base and the smooth, luscious piped frosting, the cupcake is truly a versatile and delicious dessert.

When you see a cupcake at the store or in a bakery, one tends to admire the sheer perfection of the frosting on top. Whether it be a round dome of frosting, a piped frosting displaying ridges, or anything in between, this is the part of the cupcake that you want to look good.

As you know, many bakeries and stores that produce cupcakes use a variety of fancy piping tips to get that smooth look. Piping tips are sometimes hard to get (although Amazon now makes it easy to find a nice, affordable set), and oftentimes inconvenient to use.

Baking cupcakes, but don’t have a piping tip? No problem.

To get that nice frosting on the cupcake without a tip, you can use one of four methods:

Before we take a look at these four methods in more detail, let’s take a quick look at the benefits and drawbacks of using a piping tip.

Benefits of Using a Piping Tip

Check out this quick video that shows a few different tips and the results you can achieve with them:

Drawbacks of Using a Piping Tip

Ways to Frost Cupcakes Without a Piping Tip

1 – Use a Plastic Ziploc Bag

Using a Ziploc bag as a piping tip is fast and easy. You don’t need to purchase another bag or another tip, it’s all in one.

The benefits of using a Ziploc bag are that it’s easy to use, fast, cheap, and readily available. The drawbacks are that it can get messy, and it’s hard to get that perfect circle.

This video gives a nice demonstration of piping with a Ziploc bag:

2 – Go Old School With a Knife

One of the easiest ways to frost a cupcake is with a knife. A knife is easy to use, available, and doesn’t take that much time.

The knife, though, requires time and patience if you want to use it to create a sharp and perfect look. 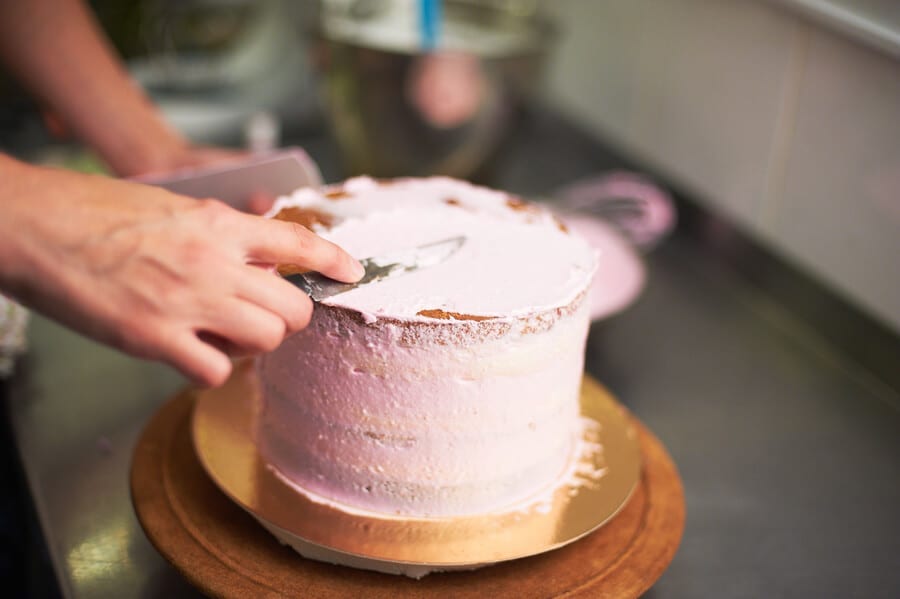 This method of frosting cupcakes is probably the easiest, and the least time-consuming. Especially if you’re using a ganache frosting, or a thin liquid frosting, this way is definitely the easiest.

There isn’t too much mess, it doesn’t require any extra equipment, and it looks good. The only drawbacks to this method is that it won’t work as well with a thicker buttercream mixture.

Check out this video around the 9:20 mark for an example:

This method of piping is simple and fun. The benefits of using a cookie dough scooper are that it’s fast and easy.

The drawbacks to using a cookie dough scooper are that it’s messy and requires multiple tools- a scooper, and a knife to smooth out the frosting.

Sometimes using a piping tip isn’t convenient. Ready to frost those darn cupcakes without one?

Give these methods a try. You’ll be sure to make beautiful looking, bakery-worthy cupcakes in no time.

Looking for more cupcake hacks? Let me show you several unique ways to fill your cupcakes without a tool and some simple ways to make frosting without the main ingredients!

idont have that bag thingy

@abcdefghijklmnop, figure it out hon! you got this!

Very helpful tips. Thanks for posting.

I'm glad I could help!

This is really helpful

So glad I could help!!