We have all had that unmistakable craving where you just need a chewy, chocolatey brownie and nothing else will do. You must satisfy that craving!

Then comes the big problem- you don’t have the ingredients needed to make brownies. What now?!

Don’t panic- you can still reach your chocolate goal as long as you have a simple box of cake mix. We will help you turn that cake into brownies and all of your brownie dreams will come true! 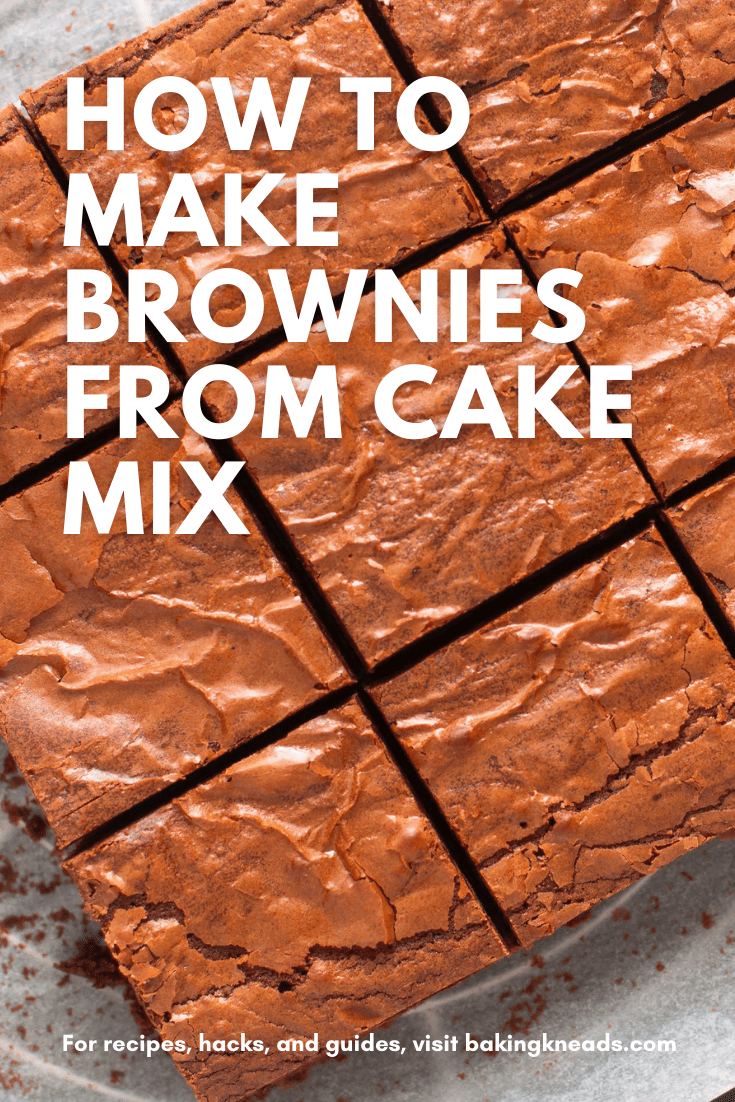 Once you understand the differences between brownie mix and cake mix, making brownies from cake mix isn’t that hard.

In short, it’s as simple as skipping the liquid, reducing the eggs, and using oil in place of butter. You will also want to reduce the baking time significantly.

For even more of a brownie fix, see what you can do with leftover brownies! 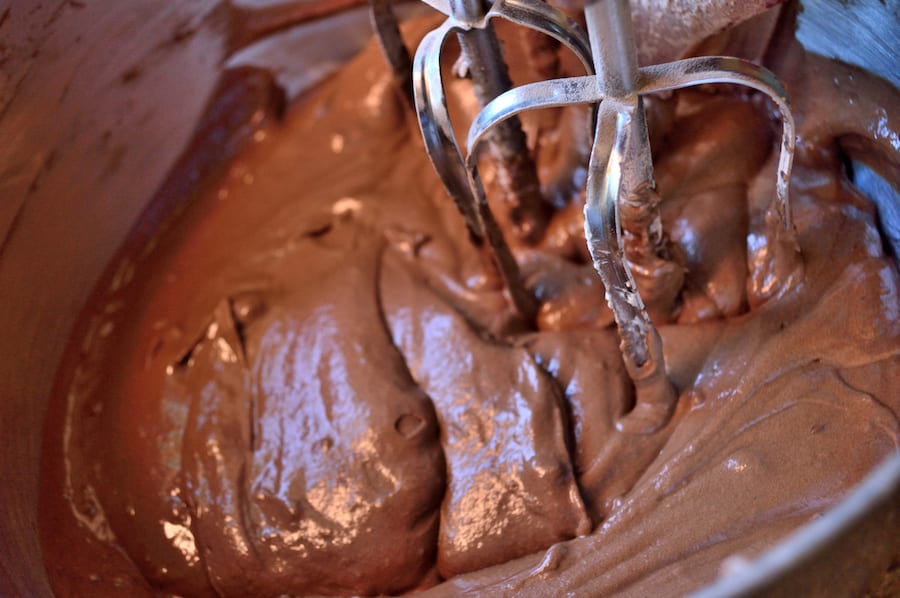 Before we magically change cake mix into brownies, what actually is the difference between a brownie batter and a cake batter? While they both have a lot of the same ingredients, (eggs, flour, oil, sugar etc) the quantities are very different.

Cake recipes have almost double the amount of flour as brownies which is one reason cakes have a spongy texture while brownies are much more dense. If you are making a chocolate cake, there will be cocoa powder for sure but not nearly as much cocoa powder as if you were whipping up some brownies.

You will also notice that a very important cake ingredient is missing in a brownie recipe- baking powder or baking soda! Brownies don’t need a leavener. In fact, they are better when they stay dense and thick- you don’t want light fluffy brownies…

So, there are some clear differences between cake and brownies that we will need to combat when using a pre measured cake mix to make brownies. Not a problem! These tricks will fight that cake mix until it succumbs to being the brownies you crave.

No matter what brand of cake mix you buy, the directions are almost always the same with all of them asking you to add around a cup of water or milk to the recipe. Skip this; you don’t want to add any liquid to your mix.

Adding water to the cake batter loosens up the mixture and makes it easier for the cake to rise while it is baking. Of course, you don’t want your “cake” to rise; you want dense brownies!

Many box cake mixes also ask for you to add hot water which helps activate the baking powder or baking soda that is in the mix. Once again, you don’t want to activate that leavener any more- in fact, you want to dull it as much as possible.

Bottom line, goodbye water. Nobody needs you to make brownies.

The average cake mix calls for the addition of three eggs (although these can easily be substituted). Eggs have two purposes in a cake: Number one is to help emulsify and stabilize the air bubbles in the cake and second, to act as a leavening agent.

While stabilizing the batter is a good idea in brownies, there is that pesky problem of leaveners again! While you don’t want to eliminate eggs completely from the recipe (they do add a lot of flavor and tasty, healthy fats…aren’t you looking for healthy brownies?!?), you can reduce the amount of eggs that is suggested.

Drop the egg quantity down to two rather than three and your cake mix will be more dense like a nice, yummy brownie. Fewer eggs will also make a more fudge like brownie so definitely follow this guideline if you are looking for a chewy brownie creation.

Out of eggs? Here are some ways to make brownies without eggs.

All About The Fat 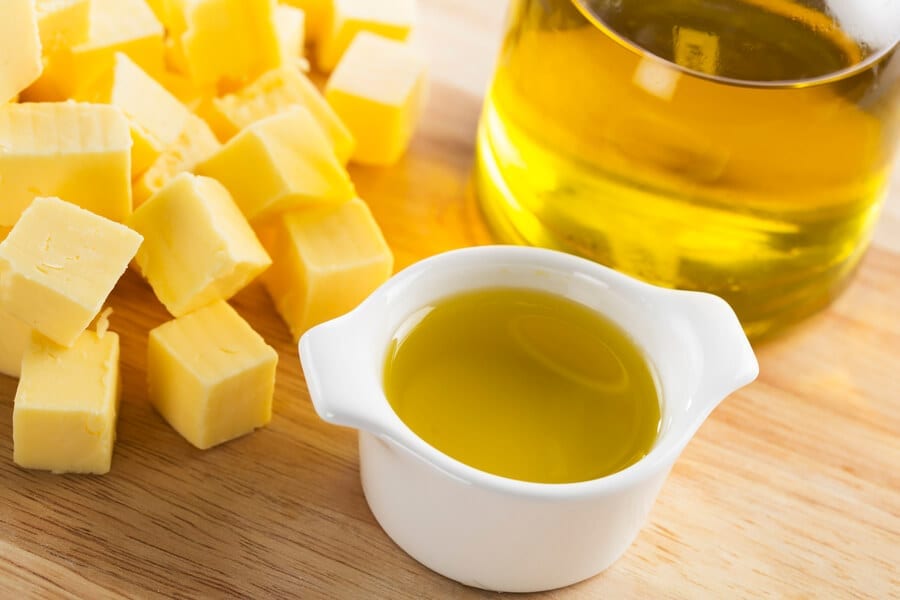 Some cake mix recipes say to use butter however, butter has milk solids in it and also lactic acid which can react with the leavener in the cake mix (aka baking powder) and help it to rise.

Replacing the butter with oil will prevent this from happening. Oil is typically used in recipes for fudgey brownies for just this reason! Oil is also a more neutral flavor than butter which allows the chocolate in the brownies to shine though.

One third of a cup of oil is the perfect quantity to make a regular sized box of cake mix into brownies. While the recipe on the back (for the cake) may say more or less, go with the 1/3 cup. This is just enough to make your brownies chewy and rich while not being too greasy.

Vegetable oil is the number one choice but melted coconut oil will also work great (and give your brownies a subtle and tasty coconut flavor!). You can even use olive oil if you want.

Cakes made from box mixes usually take around 40 to 45 minutes to bake depending on the size pan you use. After you make the box mix into brownie batter, you are going to want to cook it significantly less.

When baking a cake, you really want it to be completely cooked through to ensure the center isn’t dense and raw. But in brownies, undercooked is a good thing!

When the brownies are slightly underdone (but still baked enough to be safe to eat), they will be ooey and gooey and oh so chewy!

Pour the brownie batter into a square eight or nine inch pan and bake for just 25 to 30 minutes. Keep the same 350 degree F baking temperature that the box suggests- this is a perfect universal temperature for cakes, brownies and cookies (when in doubt, cook at 350!).

Now that you know how to make brownies from cake mix and also know why each change is made, I’m going to make it even clearer: 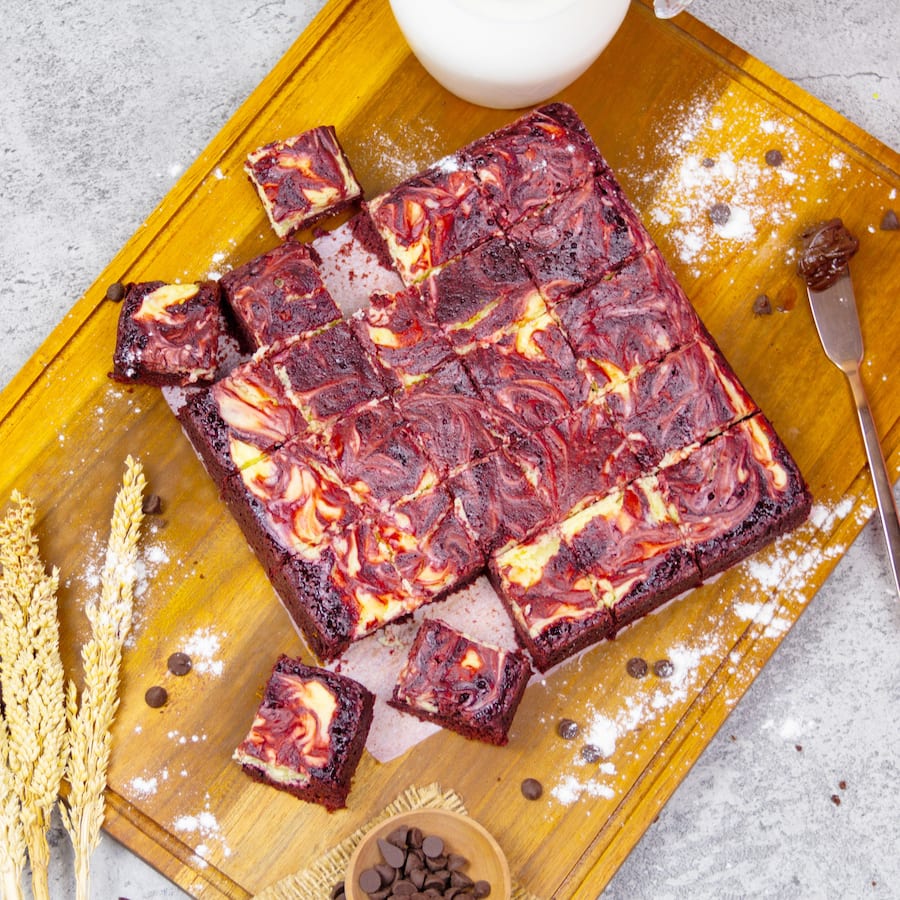 While brownies typically constitute chocolate and therefore chocolate cake mix is needed, did you know that this general recipe will work for any flavor cake mix?

That’s right- you can make brownies from funfetti cake mix or toss in a bag of red velvet cake mix to create some beautiful red rich brownies.

You can even mix in some chocolate chips or candy bar pieces to make your brownies even more decadent. The possibilities are endless!

Making brownies has never been easier than when you just use a box of cake mix to make the batter. Why even go through the trouble of making brownies from scratch when it is just so simple to use this method.

So grab that box of cake mix (any kind!) from the store and make brownies, not cake. Ignore the package directions, brownies are better than cake anyway- you’re such a rebel!

If you give this a shot, let us know how it goes in the comments below!

I tried this recipe with a boxed sugarfree chocolate cake mix because thats all i had and i want to say although it was difficult to "pour" into the pan it was delicious. Thank you for the recipe.

First off, to all of the "experienced bakers" I would like to say that just because you have experience doesn't mean you're good at it. There are many people with years of driving experience and I still don't want to share the road with them. If you're that experienced and people aren't asking you to bake their birthday cakes, you're probably not as good at this as you think you are.

That having been said, when your attempt at baking the brownies failed an intelligent person would have asked where it went wrong. Every box mix is different. Oils are different. Eggs are different. Types of pans, types of ovens, how long the batter was mixed, all of these will make a difference. What you should have done was start out by asking Sarah which mix she used. Which oil did she use, etc. Instead you attacked her because she successfully made a cake mix into brownies and you failed.

So, let me help you. I used a 15.25 oz box of Betty Crocker Super Moist Chocolate Fudge cake mix. To this I added 1/4 cup of Hershey's cocoa powder (because I wanted it even more chocolaty). I then added 2 eggs and 1/3 cup of oil. The eggs were large and the oil was Iberia, Mediterranean Style Sunflower Oil, Extra Virgin Olive Oil & Grape Seed Oil. It's probably not what most people would use but it's what I had on hand and I was in a hurry.

I mixed it using a KitchenAid hand mixer on the number 2 speed and it didn't mix very well. I then added milk, one tablespoon at a time. After three tablespoons I poured it into the pan. "Poured" is not the correct term as it would not pour. I could have used a few more spoons of milk, but I enjoy a challenge, so I scraped it out of the bowl and into the pan. The pan is an 8 x 8 Pyrex glass baking pan that I had greased with Crisco (because I'm old school).

I baked it for 18 minutes in a 350 degree electric oven. At that time I took it out and inserted a toothpick one inch from the edge and it was way undercooked. I returned it for another 5 minutes and tested it again. Then another 5. Then another. Then it was done. 33 minutes total baking time.

I let it cool and then cut it into 16 pieces. It is rather dense, but not as dense as a brownie would normally be. I think it was still more cake-like than brownie-like, but I was making them for Gus and he loved them. I expect he'll eat the entire pan between now and tomorrow and then blame me for being fat. In all fairness, he was fat before I made the brownies, but that's another issue.

All-in-all, yes you can take a box of cake mix and make brownies out of it, but they won't be exactly the same as brownies from a mix or from scratch. They will do in a pinch and if you have someone in your life like Gus, they are just fine.

@Patt Gavin, Thanks for the constructive advice. I’m sure Sarah appreciates helpful comments, both for her and her readers, instead of somewhat snarky complaints before even asking Sarah what might have gone wrong.

Thank you for this hack! I didn't think it was really bad or really good, it did cure my chocolate craving though. The main problem for me is the baking soda taste from being concentrated more than it would be for a cake. Otherwise is was like a dense cake, mine wasn't chewy at all. Glad I tried it!

I've looked extensively for an easy change from cake to brownies.You have done well what others have left out.My cake mix was purchased by accident. I love brownies but don't care much for cake.

I made these tonight with my daughter. We used dark chocolate fudge cake mix. They turned out delicious. Very easy recipe with no troubles mixing them.