Flaky, buttery, melt in your mouth pie crust….nothing can beat it! Every pie needs a perfect pie crust but what are you to do when you are missing some necessary pie crust ingredients?

Well, don’t get too distressed about the future of your pie- it will be just fine! There are plenty of ways to make a great pie crust even when you do not have the typical ingredients. 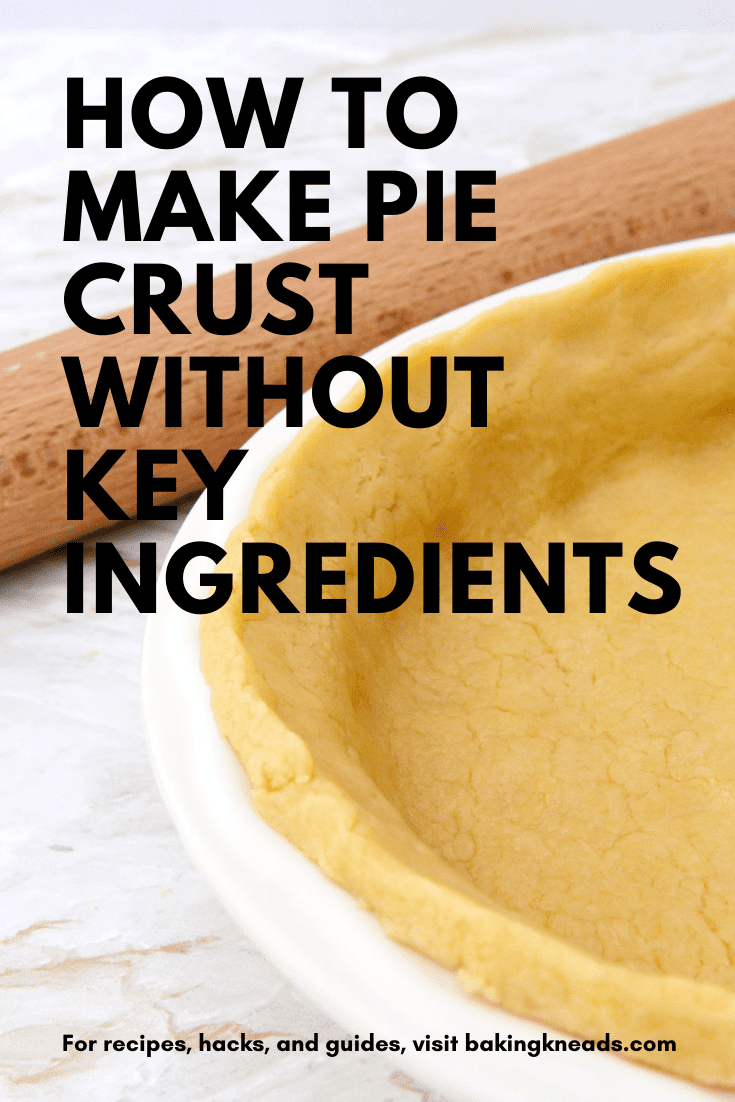 Butter is typically one of the main ingredients in pie crust and is responsible for that great smooth feeling that pie crust has in your mouth.

Butter is also the primary reason that pie crust is nice and flakey (the butter melts between layers of flour as the crust cooks which makes the flakey texture happen). It may seem like pie crust would be impossible without butter but that is not so!

Shortening is definitely the first alternative you should reach for if you do not have butter for your crust.

Shortening acts in much the same way as butter, by layering in between the flour to make a flakey texture. Some people actually prefer the taste of shortening over butter and would rather have this pie crust!

A pie crust made with shortening can also be easier to work with as it rolls out nice and smooth with very little effort. Simply use the same amount of shortening as you would butter in any pie recipe and your results will be just fine (maybe even better!).

Pie crust can also be made with oil instead of butter or shortening. You may think this sounds a little…dense, maybe? It doesn’t have to be!

Using oil may not produce a crust as flakey as one made with butter or shortening but it will not be the heavy chewy crust you could be imagining.

Crusts made with oil do not need to be rolled (rolling typically will layer the butter into the crust) but can just be mixed briefly and pushed into a pie pan.

Skipping the rolling prevents the dough from getting tough and keeps a nice texture. How easy!

Use less oil than the butter quantity called for in the recipe. Mix all the ingredients together and add oil slowly just until a dough ball forms. Stop and press into your pan!

Try vegetable oil, olive oil or, my favorite, coconut oil in your crust (a subtle tropical flavor compliments so many different types of pies).

While there are many pie crust recipes that contain eggs, this is an ingredient that is totally not needed.

Many people add eggs to pie crust to help the crust rise and stay soft and flaky. Eggs can also add to the richness of a pie crust (thanks egg yolks!).

However, if you layer your butter and flour correctly and don’t over work the pie dough, you do not need the eggs!

Water, flour and a fat work just fine to make a delicious crust!

Skip the eggs completely and add a touch more water to your recipe or look for a recipe that specifically eliminates eggs.

This is a tricky ingredient to overlook when making pie crust as flour is the main component of pie crust. However, of course, we have a few tricks you could try if you have no flour and really need a pie crust.

The first replacement to try is oat flour. All you need are dry, rolled oats (the type you make oatmeal with) and a blender, food processor or coffee grinder. Grind the oats in whatever machine you have until they are powdered…just like flour!

Use the same amount of oat flour as the replacement for regular flour. Hurray! An even healthier pie crust!

Almond flour or other nut flours will work as well.

You can essentially use the same quantity of almond flour in place of all purpose flour but you should expect a slightly greasier crust (a good grease though!).

Pie crust made with almond flour will also be a little trickier to roll as the crust may crumble and break apart easily. To avoid this problem, just press the dough into the pie pan by hand.

Sugar, just like eggs, is an ingredient that you don’t necessarily need in pie crust.

While sugar obviously makes the crust sweeter and is nice to use in dessert crusts, you can simply eliminate it without many issues.

If you are dying for a sweet pie crust, try brown sugar, a touch of honey or an artificial sweetener like splenda. Sweet success!

What About The Pan? 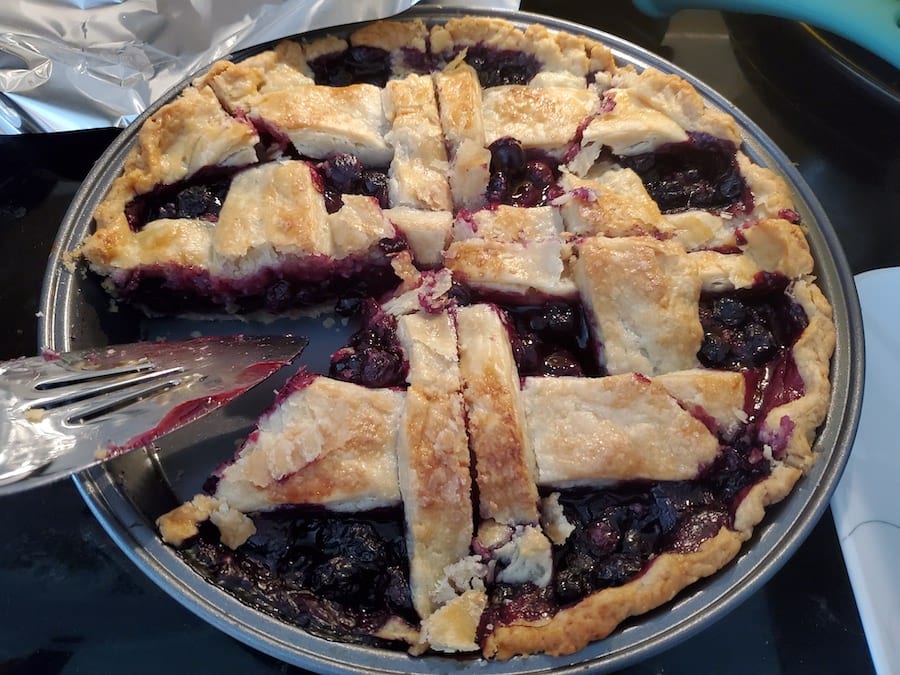 Now a pie pan isn’t necessarily an ingredient but it is typically needed to make a pie! So what happens when you do not have a pie pan to put your pie crust into?

Well, you have several options, the first being to use a cake pan.

Rather than pressing your crust into a pie pan, simply roll it into an eight or nine inch cake pan. The sides will be a little steeper (that ninety degree angle can be tough with a pie crust) but it will definitely work and hold your pie filling perfectly.

Using a muffin tin, mini or regular sized, is also a viable idea when making pies. Divide your pie crust into smaller balls then roll and press into the muffin tin.

Par bake as usual and you are on your way to mini pies! Who needs a real pie pan?? Not you!

Many pie crust recipes require you to par bake or partially cook the pie crust using pie weights to prevent the crust from rising. If you don’t have pie weights, there are many things you can use instead.

The best option I have found is to gently press a piece of foil or parchment paper on top of the pie crust once it is rolled into the pie pan. Then, fill the pie crust with metal spoons, forks or knives. The silverware will act as weights and prevent the crust from puffing up while baking!

Other options to use in place of pie weights include ramekins, coffee mugs or another pie pan. If you are lacking pie weights, don’t give up on that pie crust- just use one of these great replacements that you are sure to have around the house.

Think Outside The Box

Pie crust doesn’t always have to be flour, water, and butter.

These are both great alternatives to a usual plain crust. So melt some butter and blend it into some graham cracker crumbs or press cookie dough into your pie pan for a cool, new crust that will be delicious with your pie filling!

Pie crusts are made with so few ingredients that it may seem impossible to skip or replace any of them.

Now you know that you can definitely make crust when lacking certain key ingredients. All you have to do is take a look around your kitchen, see what you have on hand and get creative! You may be pleasantly surprised by what you can create!