I’ve used candy melts, or melting chocolate, in the past, with mixed reviews. The one that comes to mind is when I coated marshmallows in teal melting chocolate, finishing them up with candy eyes to make them look like little aliens.

These were done for my older son’s 1st birthday a couple years ago. Don’t get me wrong – they looked great! They were adorable.

I don’t have pictures, unfortunately. I always have a hard time remembering pictures when I’m running around like a crazy person on birthday party day. I do remember trying one and thinking how waxy the chocolate felt.

When Chocoley reached out to me, and I saw their claim that their chocolate wasn’t waxy, I jumped on it. Plus, their chocolate is made using select-grade traceable cacao and ethically traded ingredients of the highest quality. Slap on NO hydrogenated oils, and I’m SOLD.

Chocoley was kind enough to send me 2.5 pounds of their Bada Bing Bada Boom Gourmet Compound Chocolate Candy & Molding Formula in White! I was so excited to get this chocolate, and try it out.

(They also sent me a pound of their Bada Bing Bada Boom Gourmet Compound Chocolate Dipping & Coating Formula in Dark! Stay tuned in January to see a couple of recipes using that!)

But first, I had to pick some recipes!

I’m a sucker for a good cheesecake. That creamy goodness. That melt-in-your-mouth deliciousness.

Give me a slice of cheesecake (or a mini!), and I’m a happy girl.

So when I saw this recipe for Chocolate Cheesecake Pops, I knew I HAD to try it. I mean, what’s better than cheesecake? Cheesecake with chocolate, obviously!

This recipe is basically a combination of chocolate-covered cake pops and cheesecake.

I cut down the recipe that I got from Chocoley a little, since I only really needed twelve cheesecake pops. Other than the white melting chocolate, I used a store-bought cheesecake, sugar sprinkles (didn’t end up using these!), and edible spray glitter, along with candy sticks and small bags.

I was going to make a cheesecake specifically for these cheesecake pops, but I ran out of time! Christmas caught up with me a little too fast, and I wanted to make up a few treat bags for family before we celebrated.

To get rolling with these pops, I had set up a half sheet baking pan with a silicone baking mat to prevent sticking. For each pop, I scooped out a chunk of cheesecake and rolled it in my hands, making it a ball about the size of a golf ball.

You might want to grease your hands with something to keep the cheesecake from sticking, but don’t be afraid to get your hands messy!

I made twelve balls and put them on the mat and then threw them in the freezer to harden up a bit. After about an hour, I pulled them out and put sticks in them.

You will want to push the sticks up into the balls until they are almost coming through the other side, so you don’t lose them when you dip them in chocolate.

You can also put the sticks in the cheesecake balls immediately after you make them, but I found it to be easier after they had been in the freezer for a bit.

While they were in the freezer, I set to work on getting the chocolate ready for dipping. Instead of two pounds like the recipe called for, I chose to only use one.

The directions on the container of chocolate said that I needed to melt the chocolate in the microwave at 50% power until ¾ melted, stirring every 30-60 seconds. Once it was mostly melted, I just stirred to melt the rest.

At this point, I pulled the cheesecake pops out of the freezer, where they had been for roughly 2 hours. They were nice and solid.

To coat them in chocolate, I picked them up by the stick and dunked them in the chocolate. I spun them until I got it coated down to the stick, or almost to the stick. You’ll want to tap them on the side of the bowl to try to get any excess off.

Once they were all done, I threw them back in the freezer to set.

I gave them about 15 minutes in the freezer to harden up before I got too antsy to decorate them. I maybe got a little too excited about the edible spray glitter I got for them. GLITTER!

I sprayed each cheesecake pop with a little bit of the edible glitter to make it sparkle! So pretty!

Time to bag them up for Christmas treat goodie bags!

Didn’t they come out great?? And they tasted even BETTER! Like I said, cheesecake and chocolate. YUM!

Check out the other two recipes I made with Chocoley melting chocolate! One is a delicious, decadent Cookies and Cream Fudge, and the other is an adorable Candy Cane Heart Peppermint Bark. You won’t want to miss them!

What’s better than a delicious, rich cheesecake? Cheesecake with chocolate, obviously! Take a bite out of these classy, little cheesecake pops.

I used bags specifically for cake pops to bag them up for a goodie tin!

You can also use sugar sparkles or oil food coloring to decorate the pops. 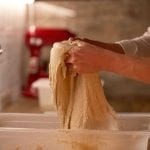 Bread Dough vs. Pizza Dough (The Differences and Their Unique Uses) 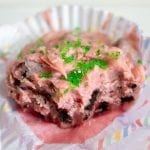 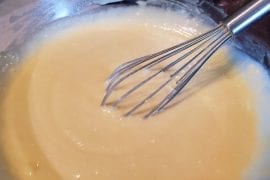 How to Mix Cake That Is Too Moist 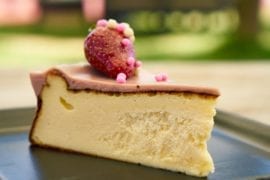 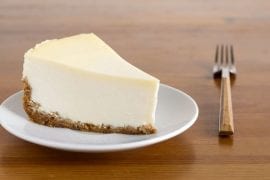 3 Reliable Ways to Get Cheesecake Out of a Pan