Go to Home » Post Archive » What is Short Dough (and How to Use it)?

You have probably noticed that the term “short” pops up a lot in baking contexts. Short dough, shortening, shortbread and short cake – it can be easy to confuse them, and not-so-easy to understand what each of them means.

They are all related however, and here I will provide you with a brief explanation of them through a discussion of that one thing which brings them (literally) all together – the short dough.

The common factor for all the above terms is fat – the ingredient that is, in its various forms; butter, oil, margarine, lard or – of course – shortening.

Shortening itself is simply a fat which is solid at room temperature, although nowadays most commonly refers to hydrogenated vegetable oil, packaged and sold for baking.

Any form of vegetable or animal fat can technically be used as shortening however, each providing its own qualities of flavor, texture and ease-of-use.

A short dough then, as will no doubt be becoming apparent, is a dough which includes a high quantity of fat, measured as a proportion to the quantity of flour.

The greater the proportion of fat, the “shorter” the dough. It may also, and in many cases, does, also include a significant quantity of sugar – although this is not essential.

A short dough should be non-elastic and somewhat brittle, easily breaking apart when pulled. In many cases it may only just come together when mixed, and may be sticky or have a crumbly texture like sand.

The baked products that it produces are typically rich and crumbly, with a distinct tenderness much desired in sweet tarts, biscuits or cookies.

The qualities produced by a short dough can be best appreciated by comparing them to products made from a non-short, or “hard” dough.

The basic ingredients for bread are flour, water, salt and leaven, and so most often it is made from a dough containing no added fat.

The tough, chewy nature of bread can therefore be seen as at the opposite end of the spectrum to a sweet, tender short dough.

The Long and the Short of It 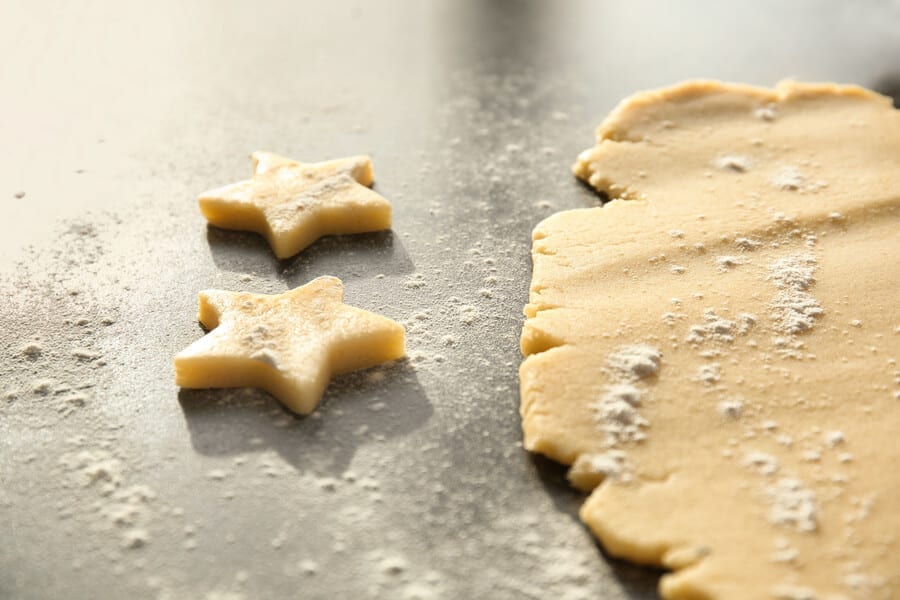 So how does the addition of this one ingredient make such a difference to the final outcome? What is going on in the dough to give it this wonderfully tender consistency? It all has to do with the level of gluten development.

Gluten forms into long chains or threads, visible as a dough is mixed or kneaded, and finally forms large matrices that hold the dough together. It is these gluten matrices that catch the carbon dioxide produced in a fermenting bread dough and cause it to rise in the oven.

Each of the two original proteins provide particular properties to the dough – gliadin gives elasticity to the dough, while glutenin offers strength.

As well as helping a bread dough to rise, the qualities produced by these long strands of gluten also give a resistance or “bite” to bread – its characteristic chewy texture.

To create a more tender baked product then, we need to “shorten” these gluten strands – that is, to prevent their development in the dough.

This of course is where the fat comes in. By first mixing fat with flour in a short dough recipe, the individual flour particles are covered or lubricated with fat, preventing them from joining with each other when any liquid is finally added.

While a limited amount of gluten may still be formed, the strands are much shorter than in a dough containing less fat, and they never get the chance to form the large gluten matrices seen in bread dough.

The short strands, low extensibility and poor strength produce a baked product that is more likely to break when pressure is applied to it, crumbling, cracking or snapping into pieces.

While the general principle of a short dough is that it should contain a high proportion of fat to flour, short doughs can be made in a great many variations and for a variety of applications.

These generally fall into one of two categories – short pastry doughs, or shortcrust pastry, and biscuit or cookie doughs (learn about the different types of pastry here). Both seek a tenderness as opposed to a toughness in their crusts or the body of the cookie.

It should be noted that the term “short dough” generally refers to non-yeasted doughs (do you know how to make yeast-free bread?). Brioche and bun doughs, while containing butter and many similar ingredients to pastries and cookies, are not typically considered short doughs.

Short doughs should likewise not be confused with laminated doughs, in which layers of butter are enveloped in layers of a strong, non-short dough.

Here the aim is that evaporating steam will get trapped between the layers causing them to rise or puff up. A short dough, by the nature of its chemistry, does not rise or puff up in the oven. 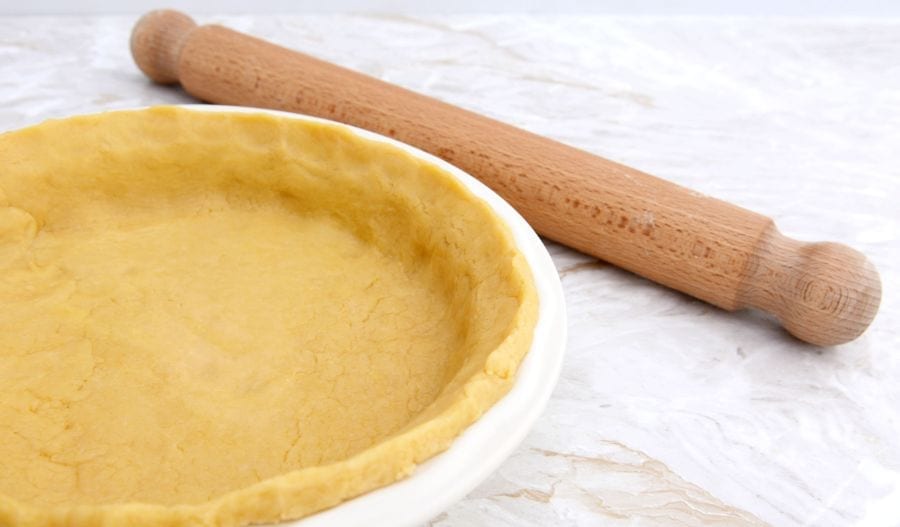 There are many variations of basic shortcrust pastry, which use the addition of extra ingredients to adapt it to sweet or savory dishes.

Basic shortcrust pastry makes a classic pie crust, while pâté à foncer is a version enriched with eggs and a small amount of sugar.

Sweeter versions of shortcrust pastry go under several names, such as pâté sucrée, pâté sablé, sweetcrust pastry or sweet shortcrust pastry. These incorporate larger quantities of sugar which adds to the tenderness of the crust as well as making them ideal vessels for sweet tarts.

The other main use for short dough is in cookies or biscuits, and the quintessential short dough biscuit is of course shortbread.

This classic Scottish treat is made by combining flour, butter, and sugar in a ratio of 3:2:1, and epitomizes the typical short dough qualities with its crumbly, melt-in-the-mouth texture.

Not to be confused with shortbread, shortcake is another example of a sweet cake that takes its name from the type of dough used to make it.

The properties of a short dough can be tweaked by small changes to the way in which it is made. Fully rubbing the fat into the flour is the way to go when you want a moisture-resistant crust – perfect for quiches or fruit pies.

By leaving larger particles of fat in the dough on the other hand, you can produce a flakier crust which will blister when baked.

Rubbing the fat into the flour before adding any liquid is a sure-fire way to ensure maximum lubrication of the flour and hinder the formation of gluten.

In sweet short doughs the sugar can even be creamed with the fat before adding it to the flour. You should also minimize the amount that the dough is mixed, again to limit gluten development, and generally handle it as little as possible.

The high quantities of fat can make the dough very sticky if it gets too warm, so refrigerating the dough after mixing it can be a big help.

Generally when working with short doughs it is a good idea to keep them as cool as possible.

In summary then, the trick when producing a short dough is to prevent the flour from hydrating and forming long gluten strands. What good fortune it is that we have such a tasty ingredient to do this for us!

Thank you for this entertaining and knowledgeable answer to a question that was on my mind. I remember hearing my mother saying "Her biscuits are always too short" when speaking of one of the employees in my parents' restaurant. I know it was explained to me, and I had a general idea, but you painted a picture so that I can understand it! Shortbread is the one thing I can't make on my keto diet to taste good.